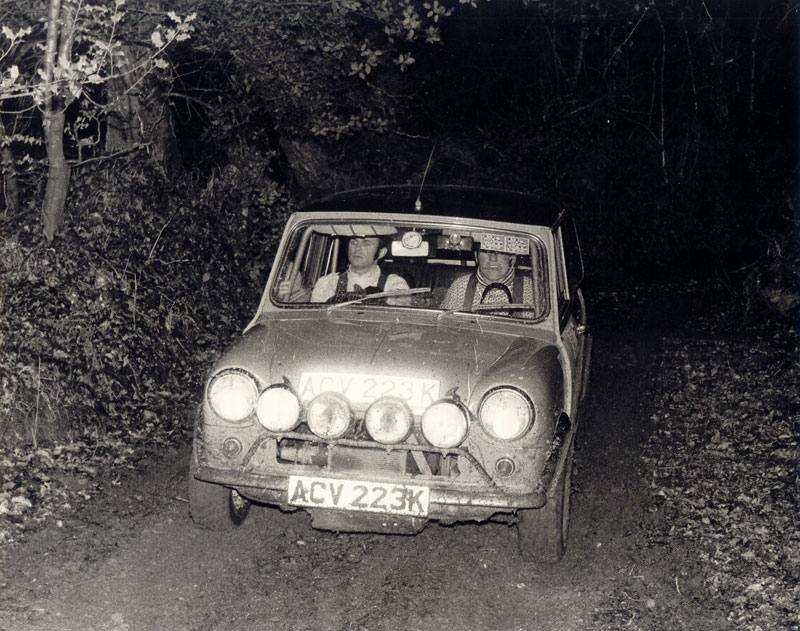 Younger members of the club may not have known Derek Stephens, but he was a super chap who I had the privilege of navigating for between 1971 and 1974.

I first met Derek through his sister Jill who happened to be my newly wedded wife’s best friend. The conversation took on a motorsport flavour; in fact we spoke of little else!
The outcome resulted in an entry on the 1971 Novice Rally organised by Camel Vale Motor Club.

With Derek driving in a rally for the first time and myself map reading for the first time, it took a while to acclimatise, however no time was needed to assess just how quick we were travelling!
Although procedure was at a fair rate it all felt very controlled, which was very reassuring and the confidence in my pilot grew by the minute. Our efforts resulted in a win, which sent us home ready to conquer the world!!

By now Derek had got ‘the bug’ and was already suggesting we convert his 2 month old Cooper S from hydrolastic to dry suspension, the sump guard having already taken a pounding under hard braking.
However, before attempting such work we entered Truro’s 1971 November Rally. A 200 plus mile event, starting at Playing Place Garage at 11 pm with the big boys!!
Fourth overall resulted in a few tongues wagging and some mutterings of ‘fair means or foul’.
Rather than argue Derek was determined to prove otherwise on the next event. And so we did by coming 2nd overall despite having 2 punctures on the way. I was told later of a Marshal’s remarks on Derek’s driving … ‘He’s either going to win or have a accident!’ That’s how quick Derek was.

We continued rallying together until 1974 with some considerable success. Success which could be seen in the character of the man.

I know those of you who knew Derek will join me in our heartfelt condolences to his family.